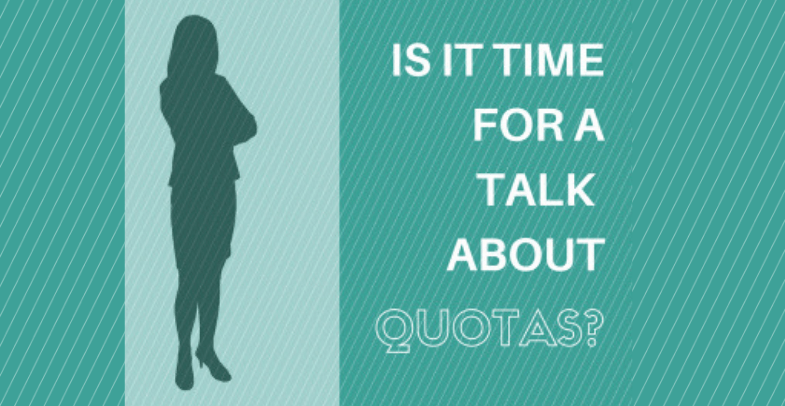 80 nations set quotas for female leaders. Should the U.S. be next?

Alexander De Croo is not a partner at BCG, a top global consulting firm. His wife is. Yet when he accompanies her to big consulting events, at least one person typically approaches the couple and asks De Croo which division he heads at the company. They assume his wife is there as a significant other.

Even in 2019, De Croo says, the bias remains that men are leaders and women are not.

“A lot of people in western Europe and the U.S. think the battle is won and we have equal rights for women and men,” he said. “But there are so many biases that push women down.”

De Croo, Belgium’s deputy prime minister, has spent significant time in developing countries in recent years asking leaders, “Where are all the women?” Research and history show nations that educate girls and have more women in the workforce do better economically, he says.

But he’s asking the same question in Europe and the United States: Where are the women?

There are only 24 female chief executives among the 500 biggest publicly traded U.S. companies, up from 15 a decade ago. The political realm is a tad better: The European Parliament is 37 percent female, while women make up 24 percent of representatives and senators in the U.S. Congress.De Croo attends a “Women in Finance” lunch in Belgium in February 2019. Belgium put a gender quota in place for its 1994 elections and expanded it in 2002 to require political parties to put equal numbers of men and women on the ballot. (Serch Carriere)

De Croo says already slow progress is in danger of stalling. To address the inequity, he is turning to a controversial idea. He is calling on governments around the world to set quotas that require a certain percent of leadership roles to be filled by women.

“I agree we should take the best. We should stop thinking the best are only men,” De Croo said in an interview with The Washington Post, shortly before his appearance at the South by Southwest Conference in Austin, where he pitched his message that feminism is good for the economy, for women and for men. It’s one he draws from his book “The Age of Women: Why Feminism Also Liberates Men,” which is soon to be released in English.

His quota proposal has received blowback, from conservatives in Europe who argue there aren’t enough qualified women in some fields and from free-market Americans who recoil at the idea of government interfering in hiring decisions, especially for private companies.

“Quotas are really difficult to justify in a competitive marketplace,” said Donna Ginther, an economics professor at the University of Kansas. “We typically do not tell private-sector companies how to do their business. As long as they are not breaking the law and they are producing goods for market, we leave them alone.”

Some also worry his plan to elevate women will backfire.

“Under gender quotas, women start to get regarded as less qualified,” said Olga Shurchkov, an associate professor of economics at Wellesley College. “Having a gender quota could undermine the legitimacy of women who are trying to fight their way up the ladder.”

De Croo is clear that even he, a socially liberal European politician, is calling for a quota only for government roles.

Belgium put a gender quota in place for its 1994 elections and expanded it in 2002 to require political parties to put equal numbers of men and women on the ballot. When the quota was introduced, 16 percent of Belgium’s seats in parliament were held by women. Today it is more than 40 percent.

Eighty countries have a similar quota to Belgium’s or outright reserved seats for women in the nation’s legislature, according to the Gender Quotas Database project, a joint collaboration of International IDEA, the Inter-Parliamentary Union and Stockholm University.

To De Croo’s thinking, government should reflect the people, and half the population is female. Too often he says he’s seen underqualified men selected for top posts while overqualified women either don’t put themselves forward or get pushed to the side. He thinks quotas are needed — at least for a while — to force political leaders to recognize talented women who have been systematically overlooked.

A growing body of economic research supports De Croo’s assertion that prejudices — both deliberate and unconscious — play a role in stopping women from being promoted or selected for prime roles as often as men, even when they have similar qualifications.

“It’s impossible for anyone to claim they are not biased,” said Diane Lim, principal of District Economics Group and a former economist at The Conference Board, where she studied corporate diversity issues. “Humans have a tendency to see more value in a person and give them more opportunities when they remind you of a younger version of yourself.”

The No. 1 pushback De Croo gets is from men who argue a quota would lower the bar and allow incompetent people to get government jobs or seats in parliament.

“Each time, I cannot believe my ears. Do you really think that there are not enough skilled women to be found?” he said. “Quotas have nothing to do with putting women in a situation where they don’t belong. The value of the quota is to say to men, ‘Try harder.’ Talented women are there, but you need to do the additional work to identify them.”

De Croo’s message to Americans is if they don’t want an explicit quota, vote for presidential candidates in 2020 who pledge to have equal representation in the Cabinet, a reference to the more than 20 posts like treasury secretary and defense secretary that are considered “Cabinet level” because of pay and significant responsibility.

Former Starbucks CEO Howard Schultz, who is mulling an independent presidential run, pledged this month that his Cabinet would “truly” represent America with “a greater share of women than any previous president.”

Schultz is seen as a long shot candidate, but he could pressure others to make a similar vow, especially as a record number of women run for president.

President Trump has five women at the Cabinet level. Barack Obama topped out at eight in his second term. George W. Bush’s maximum was five, according to an analysis by the Center for American Women and Politics.

In Belgium, three of its 12 top “minister level” positions are held by women, similar to Trump’s ratio. De Croo sees it as another sign of the enduring glass ceiling, even in a country with a growing number of female politicians in parliament.

“Only three Belgian ministers are women. That to me is undefendable,” De Croo said. “I cannot imagine the next government won’t have parity in male and female ministers — or something close to parity.”

De Croo’s call for a gender quota in the public sector but not the private sector is backed by a growing body of research, many economists said.

In 1993, Sweden’s Social Democratic Party implemented a quota that required local branches of the party to alternate between male and female candidates on the ballot. In 2017, a group of economists from the London School of Economics, Uppsala University and Stockholm University published an explosive study showing what happened before and after the quota. The extensive analysis concluded that government improved because the quota caused highly skilled women to enter government and displace “mediocre male leaders.”

While some fear a quota could encourage less competent women to get through, the evidence suggests the opposite happened. Experts who study gender dynamics in the office aren’t surprised.

“We have ample research showing that generally men have to meet a lower bar than women to be assumed competent or to be promoted,” said Jill Yavorsky, an assistant professor of sociology at the University of North Carolina at Charlotte, who specializes in gender research. “Perhaps we should be asking how many unqualified men are making it to the top in our current system.”

Studies of board quotas in Norway and Italy found that while more women joined, it did little to change the culture at the company overall or to help promote more women throughout the company’s ranks.

“It’s not like anything bad happened in Norway. Companies found qualified women to serve on boards, but nothing trickled down beyond that. Gender quotas on boards don’t solve the whole problem,” said Marianne Bertrand, an economics professor at the University of Chicago Booth School of Business and lead author of the study on Norway.

Bertrand said that most European countries wanted to have quotas requiring close to gender parity at the management ranks of large companies but that the lobbying from the business community against it was so strong that governments backed down.

Most scholars interviewed for this article said that while they think there is a case to be made for quotas, they felt the U.S. government and American companies could start with less controversial policies to help level the playing field for women.

Nearly all agreed the United States needs paid parental leave and more affordable child care to alleviate some of the strain on working women. There are also many calls for mentoring programs, ending the gender pay gap and a cultural shift in which men share more of the work at home.

Lim said one of the most effective policies she has seen is when businesses force senior men to mentor younger women or minorities because it helps older white males see talent that doesn’t look like them.

Yavorsky advocates for managers to be evaluated on whether they meet specific “goals” for mentoring and promoting women and minorities, creating real financial incentives to identify diverse talent.

“There’s remarkable evidence that earnings for men and women move in sync up until the birth of a couple’s first child. This is when women lose and they never recover,” Bertrand said. “We have to make the ‘penalty’ of motherhood not so large.”

De Croo says he wrote his book because his own thinking has evolved greatly on these issues and he believes men need to realize that advocating for better policies for women helps them and their organizations, too.

But he knows he hasn’t won everyone over on his quota proposal. His wife, Annik, says she is “not a big fan” of mandates and favors goals instead.

“I don’t agree with everything in the book but I’m in­cred­ibly proud he wrote it,” she said. “Some people believe because he’s a politician in Belgium I should live in his shadow. But we have made it clear that is not the case.”