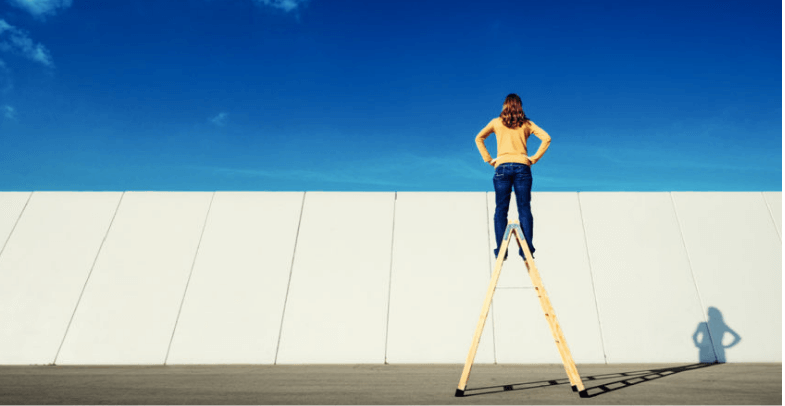 A Lack of Sponsorship Is Keeping Women from Advancing into Leadership

Too few women are reaching the top of their organizations, and a big reason is that they are not getting the high-stakes assignments that are prerequisite for a shot at the C-suite. Often, this is due to a lack of powerful sponsors demanding and ensuring that they get these stepping-stone jobs.

Ensuring that women get the sponsorship they need to move up has proved elusive for most organizations. Many companies have halted formal sponsorship programs, citing pushback from executives who feel they are being asked to advocate for people they don’t know well or don’t think are ready. This isn’t a reason to give up on sponsorship; it’s an opportunity to reinvent how we approach it. Sponsorship is rarely something you simply turn on and off.  Rather, it’s a relationship, one that has evolved from lesser to greater trust and public commitment.

Let’s first refresh our memory about why sponsorship matters.

The vast majority of CEOs come from line positions — positions with authority over major initiatives. But, as the 2016 McKinsey Women Matter study showed, as women move up their organizations’ hierarchies, they increasingly shift from line to staff jobs — roles requiring focused expertise or assistance rather than responsibility for major projects — while the percentage of men in line roles remains about the same. By the time women reach the upper middle management levels, only about 20% are in jobs with profit and loss responsibility.

Not only are men more likely to be in line jobs, they get bigger jobs overall. A 2012 study of alumni of top business schools found that, other things being equal, more men than women had direct reports and budget responsibility of greater than $10 million. Men’s projects had budgets twice as big as women’s and headcounts three times the size. About one third of the men reported getting a great deal of C-suite visibility while working on their projects, compared to one quarter of the women.

This disparity in access to critical roles may be compounded, or perhaps caused, by differences in women’s and men’s relationships with executives who can provide access to those jobs. Here human nature creates an uneven playing field: People’s tendency to gravitate to those who are like them on salient dimensions such as gender increases the likelihood that powerful men will sponsor and advocate for other men when leadership opportunities arise.

The similarity principle – which affects all workplace relationships — is even stronger when it comes to sponsorship, because the stakes are higher. Sponsorship is a kind of helping relationship in which senior, powerful people use their personal clout to talk up, advocate for and place a more junior person in a key role. While a mentor is someone who has knowledge and will share it with you, a sponsor is a person who has power and will use it for you.

When it comes to this important distinction, the evidence is also clear: women tend to be over-mentored and under-sponsored.

Research by my colleagues and I have found that having a mentor increased the likelihood of promotion two years later for men, but had no effect on promotion for women. One reason was that the women’s mentors were less senior than those of the men and, as a result, lacked the clout needed to advocate for them.

Likewise, the women in the McKinsey research reported having fewer meaningful interactions with senior leaders, compared to their  male peers—and this gap widened as they advanced.  Yet, a senior person needs to get to know a potential protege well enough to vouch for them, especially when there is competition for a coveted role. The women in the McKinsey study were also less likely to say that a senior leader outside their direct management chain had helped them get a promotion or challenging new assignment—even though women were more likely than men to have been assigned a formal mentor.

I have worked with dozens of organizations that have experimented with sponsorship schemes only to return to less controversial (and less effective) mentoring programs. Typically, they abandon sponsorship because experience has shown them that while you can ask senior executives to provide advice and support to high-potential women, you cannot mandate that they spend their personal capital advocating for people they don’t know well or may not be bullish about.

This is a legitimate concern, and it’s important to recognize it. While an executive’s store of knowledge will not be depleted if he or she shares it with someone else, the political capital he or she spends fighting for someone to get a key assignment can no longer be used on something else. So it is only rational for them to use it sparingly — especially if you consider sponsorship to be binary: either you fully sponsor a person or you don’t. 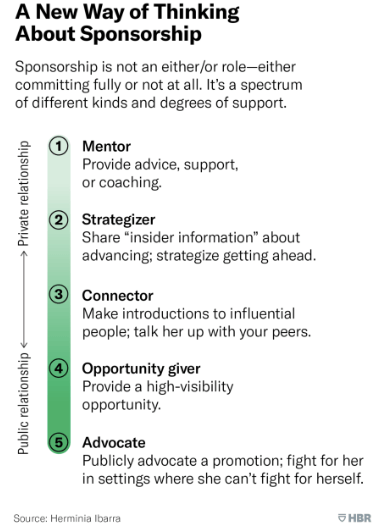 But sponsorship doesn’t have to be all-or-nothing. Companies need to shift away from seeing sponsorship as an either/or and move toward a view of sponsorship as a spectrum of behavior, one that allows various types of commitment — and one I’ve found to be more effective in connecting women to powerful sponsors. 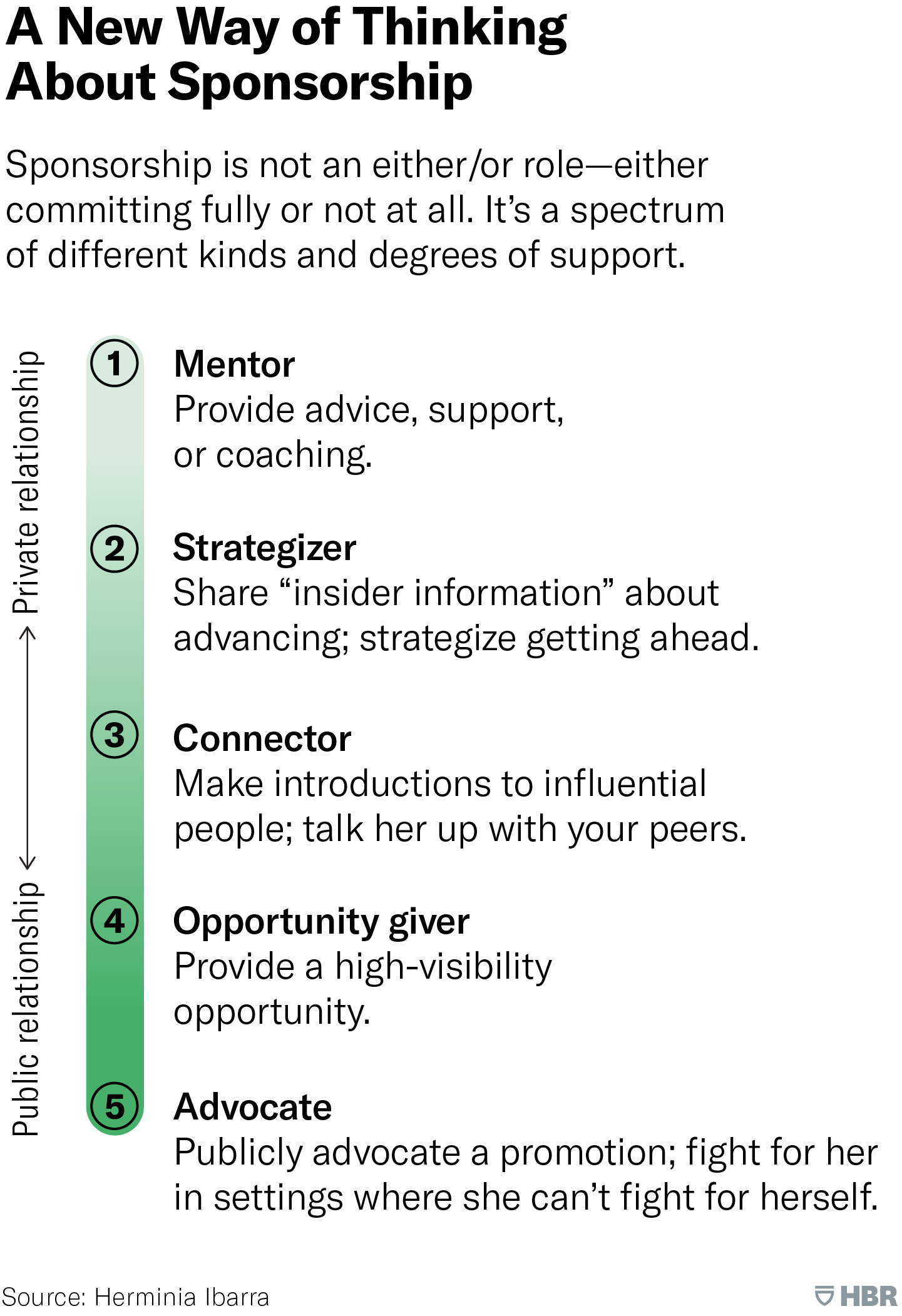 Find this and other HBR graphics in our Visual Library

In between these opposite ends of the spectrum lie a range of helping roles that can, over time, evolve authentically to full sponsorship. This leads to better outcomes  than having executives tick a box on a formal program without ever really becoming an advocate. In order of ascending commitment, these include:

As an individual executive, a good place to start is by taking stock of who you mentor and what kind of help you provide. Unless you already know a prospective protege well, you will likely find yourself at one of the lower points on the spectrum. That is not to say that the help you are providing is not important. But, it is not yet adding the value of full-fledged sponsorship. As you get to know the high potential women that you already mentor, ask yourself: Where am I on the sponsorship spectrum? What would it take for me to move up on notch on the spectrum?

The spectrum can also be a useful tool for women who are aiming at the upper reaches of their organization. For starters, it’s important to keep in mind that when you ask someone to be your sponsor, you’re asking them to use their hard-earned political influence to help get you into a mission-critical assignment that others want as well. Keep in mind that the best sponsor is someone who is present when key staffing decisions are made and has relationships with other influential executives in the firm. Who is the most powerful person who knows you and your work well enough to be willing to vouch for your capacity? If those who know you and your work are not influential enough to advocate for you, where on the spectrum can they help? Can they help connect you to someone who is? Or, give you a project that has you presenting to such a person? The point is to strategize how to make your way up the spectrum.

Thinking in terms of incremental steps towards full-blown sponsorship also has clear implications for whether you seek a male or a female sponsor. Up and coming women often prefer women mentors and sponsors because they value advice from people who have faced some of the same dilemmas as they have. But, since in most (but not all) business organizations it’s men who have the power and top positions, most of the people best placed to be effective sponsors will be men. Even when women have senior titles, as we note above, most are not in the mission-critical roles that come with real power. As a result, they simply may not have enough clout to get the sponsoring role done. A study conducted by David Smith & Brad Johnson at the U.S. Naval Academy and War College, for example, found that when women are mentored by men, they make more money, get more promotions and have better career outcomes – not because men are better mentors but because they have more power.

Having an executive-level sponsor can be make or break for a high-potential woman’s career, particularly when it comes to getting important roles that are stepping-stones to the top. But in order for these kinds of relationships to flourish, both executives and their organizations must be clear about what sponsorship is and what steps they might take in order to ensure women have the full-bloom sponsorship support they need.