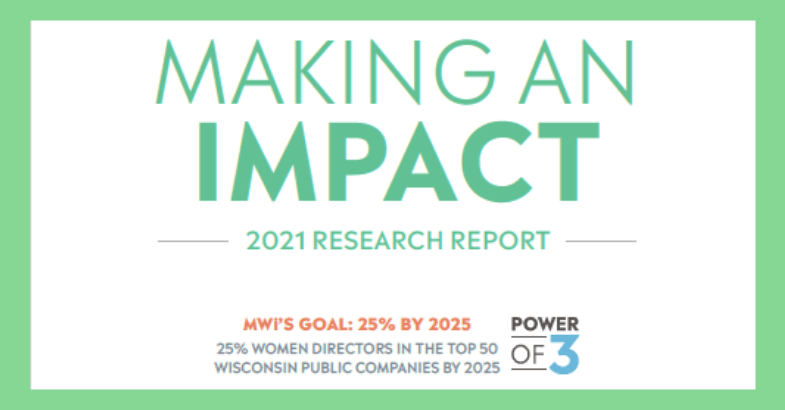 The percentage of women on Wisconsin corporate boards continues to increase, according to new research from Milwaukee Women inc.

The nonprofit group has produced research on board gender diversity of the 50 largest Wisconsin-based public companies since 2004. Its goal is for women to occupy 25% of board seats at those companies by 2025.

Milwaukee Women inc also highlighted an increase in the number of companies with at least three women on their boards. Thirty-four percent of the Wisconsin 50 companies have three or more female board members, up from 25% in 2020. The organization points to research indicating that women need to hold at least three seats for boards to realize the benefits of gender diversity, such as better financial performance and more innovative ideas.

Over the past 10 years, there has been a 73% increase in the number of women holding director seats on the boards of the Wisconsin 50; and in that time, the number of those companies with three women board members has increased from 5 to 17.

“Since 2011, public companies in Wisconsin have made sustained and impactful moves towards gender parity on their boards of directors. In the past year alone, 15 women joined Wisconsin public company boards, moving the state ever closer to Milwaukee Women inc’s goal of 25% gender parity by 2025,” said Pat Ackerman, senior vice president of A.O. Smith Corp. and chair of Milwaukee Women inc.

When it comes to company leadership, 23.4% of Wisconsin 50 executives are women, up from 21.9% last year. And 46% of companies have three or more women executives, up from 21% last year.

Menomonee Falls-based Kohl’s Corp. topped the Wisconsin 50 with the highest number of female directors on its board (six of its 15 directors), while Madison-based Exact Sciences had the highest percentage (44% or four of its nine directors).