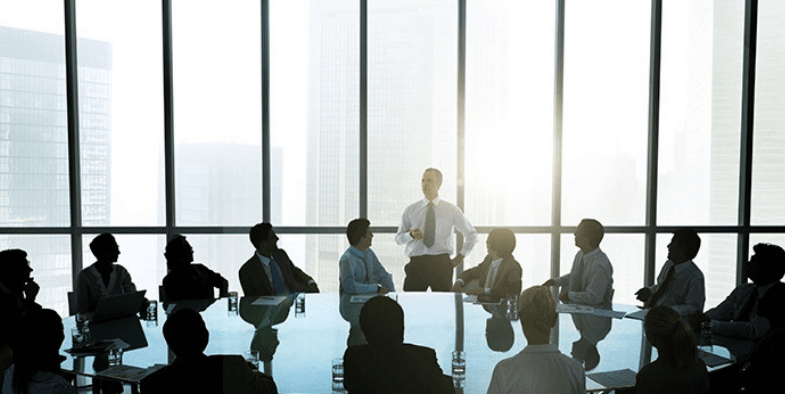 The following are the key findings and insights.

While progress continues to be made, hundreds of US public companies still have an all-male board of directors. Only about 10 percent of S&P 500 companies explicitly disclose individual directors’ race (ethnicity), and 8 out of 10 of those board members are white.

Gender diversity has been accelerating, including among smaller companies, but female directors continue to represent less than one-fifth of the total population of board members in the Russell 3000, and 13.4 percent of Russell 3000 companies do not yet have a single woman on their board.

The total share of women in the Russell 3000 director population is just 18.5 percent, an increase of only 4.2 percent since 2016. Moreover, of the companies with female directors, the majority have only one or two—on a board that, at the median, is composed of nine or 10 members. Even in the S&P 500 index, which in 2019 celebrated the election of at least one female director to the last remaining all-male boards, the total percentage of women continues to be shy of one-quarter of all board members. The lowest percentages of female directors are seen in the energy (12.7 percent), health care (17.2 percent), and information technology (17.4 percent) 4 CORPORATE BOARD PRACTICES IN THE RUSSELL 3000 AND S&P 500 | 2020 EDITION www.conferenceboard.org sectors. Energy companies, in particular, report the highest percentage of all-male boards (27.5 percent).

Leadership opportunities within the board are also not made equally available to women: almost all board chair positions remain held by men (only 4.7 percent of companies in each of the Russell 3000 and S&P 500 indexes have a female board chair) and less than 1 out of 5 board committees in the Russell 3000 are led by women. 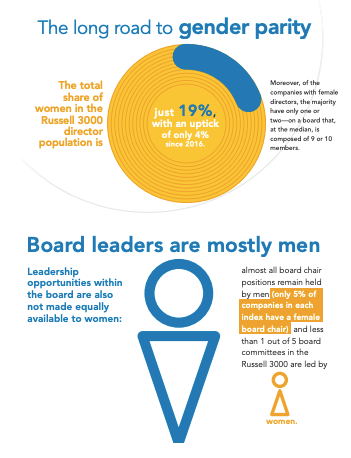 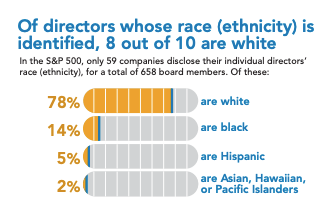 A majority of companies in the S&P 500 include photographs of their directors in proxy statements, which can be an indication of board diversity, particularly in terms of gender. Using photographs to disclose diversity, however, has limitations as it assumes readers will make inferences based on appearance and does not capture the multidimensional nature of diversity. In the S&P 500 index, only 59 companies also disclosed (whether in text or through charts) their individual directors’ race (ethnicity), for a total of 658 board members. Companies in the utilities and financials sectors are the most likely to provide this type of disclosure (32.4 percent and 21.1 percent of S&P 500 companies in those sectors, respectively), while only 3.3 percent of consumer discretionary companies offer it. When such disclosure is provided, it is based on self-identification information volunteered by individual directors to the company.

Of those 658 board members whose race (ethnicity) is identified, 8 out of 10 (78 percent) are white, 13.5 percent are black, 5.2 percent are Hispanic, and 2.4 percent are Asian, Hawaiian, or Pacific Islanders (for a total of 22 percent nonwhite). The nonwhite population represents approximately 40 percent of the total population of the United States, according to the US Census Bureau.1

The scrutiny of board diversity practices will continue to intensify, driven by multiple factors. More and more institutional investors are following the lead of prominent asset managers such as State Street, Vanguard, and BlackRock, moving diversity to the front and center of their corporate stewardship initiatives.2 On the eve of the 2020 proxy season, the Office of the New York City Comptroller launched the third phase of its Boardroom Accountability Project, calling out companies that do not have a policy requiring that women and people of color be considered for every open director seat—a version of the so-called Rooney Rule pioneered by the National Football League (NFL).3 In February 2020, proxy advisor ISS started to implement a new adverse voting recommendation against the chair of the nominating committee of companies with no female board members.4 In July 2020, a coalition of organizations led by the US Chamber of Commerce sent a letter to the Senate Banking Committee in support of a bill that passed the US House of Representatives last year and would mandate proxy disclosure of self-identified race, ethnicity, and gender of corporate members and executive officers.5 And, as California has already done, the states of New Jersey, Massachusetts, and Washington have introduced their own legislative proposals setting a female quota for public company boardrooms.6

For these reasons, boards should make diversity an integral part of the ongoing board succession planning process. While this is particularly important for those smaller companies where diversity is still lacking, even companies with some board diversity should avoid the risk of being complacent on this important topic and of adopting a check-the-box, compliance approach. The efforts to improve diversity may include: requiring a diverse slate of candidates for each open position; endorsing the model proposed by the Committee for Economic Development of The Conference Board (CED), where every other board seat vacated by a retiring board member is filled by a woman,7 or the model described in recent California legislation that amended the Corporations Code to require between one and three directors (depending on the size of the board) from an underrepresented community by the end of 2022;8 ensuring that nominating committees, which take the lead in the director recruitment process, are diverse; and considering diversity when making board and committee leadership appointments

While the focus in recent years has tended to be on director gender diversity, recent events in the United States and across the world will focus increasing attention on racial and ethnic diversity in the boardroom. Companies should consider getting ahead of investor demands and include more information on the racial and ethnic backgrounds of directors on their websites, even before they issue their next round of proxy statements, as part of a broader explanation of the multiple dimensions of board diversity. In considering and disclosing diversity, companies should not feel constrained by EEOC reporting categories on race,9 which are limited and may not reflect the full ethnic diversity of the board.