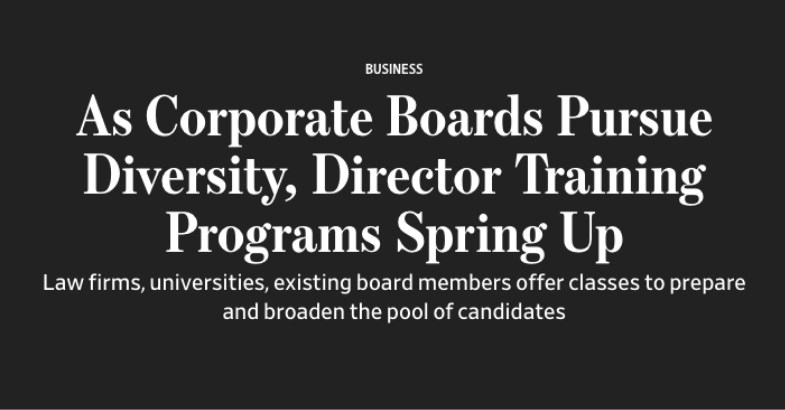 U.S. companies are turning to programs aimed at preparing women and people of color for corporate board roles in a bid to comply with calls from regulators and investors to diversify their directors.

Law firms, universities and current directors of companies have launched new or expanded programs over the past few years to coach prospective board candidates, offering training on topics from corporate governance to committee work. Some programs are free or sponsored by companies, while others can cost thousands of dollars.

Sponsors are hoping to broaden the pool of people who are ready to fill board roles beyond former chief executives to other qualified business leaders. They also can match candidates with board openings, as companies’ boards are still largely white and male with roles often filled through professional networks of existing directors.

Some companies may soon face penalties if they don’t have a certain number of women or people of color on their boards. California could start assessing fines to companies based in the state that don’t abide by its rules after Dec. 31. Nasdaq-listed companies will be required to publish a standardized template of board-level diversity statistics starting in 2022, and must have at least one diverse director—or explain why they haven’t—starting in 2023. Institutional investors and proxy advisers have also said they may vote against director nominees if the company’s board isn’t sufficiently diverse.

“The progress we’re seeing is as much about investor pressure and engagement on the issue as it is legal mandates,” said Marc Goldstein, head of U.S. research for Institutional Shareholder Services, a proxy advisory firm. “Even if we see the California mandate struck down…the pressure isn’t going to go away on companies.

The diversity push helped fuel turnover among corporate boards, with companies in the S&P 500 adding more directors in 2021 than in any year since 2004, according to data from Spencer Stuart. Nearly three-quarters of new independent directors are women or belong to racial or ethnic minority groups, the recruitment and advisory firm said, adding that nearly half of those directors were serving on a board for the first time.

Given the influx of first-time directors, the National Association of Corporate Directors in 2020 introduced a program called Accelerate to help connect diverse candidates with board opportunities. It has about 415 people in the program and roughly 25% of participants have secured a public, private or nonprofit board seat, said Stephanie Mullette, NACD’s senior vice president of membership.

“It’s not just training, like you had to go to take Corporate Governance 101 at business school or law school,” Mr. Ogawa said. The program, he added, is more about giving candidates tools to find their path to a board seat.

Lisa Nelson, a former Microsoft executive, joined three programs over the past 18 months that offered mentoring and other support to women interested in joining corporate boards.

Ms. Nelson, who previously co-founded and led Microsoft’s venture fund, said she built many connections over her decade-plus with the tech giant, but also wanted to expand her network. She now sits on six boards, including one for Astra Space Inc., a California-based publicly traded company she was introduced to through longtime corporate director Maggie Wilderotter. Ms. Nelson participated in a board boot camp for women run by Ms. Wilderotter.

“I call it a club, and you have to figure out how to get invited to the club,” said Ms. Nelson, who also started citing her background as Asian-American and Pacific Islander as one of the ways she distinguishes herself. “That’s the hard part for many people,” she said.

Jan Fields, who serves on several corporate boards, said there is more competition when companies are seeking diverse candidates so she has sought to cast a wider net, such as using recruiting companies or tools like a director database from governance-data firm Equilar Inc. She said Equilar’s database has helped her connect with younger candidates who are high-level executives, though often not CEOs, and may be first-time board members.

“It used to be if I called somebody and said we’re interested in you for a board, they’d jump right on it,” said Ms. Fields, who is chair of the nominating and governance committee of women’s clothing retailer Chico’s FAS Inc. “Today they’re mulling offers from two or three others, or they’re deciding if they even want to go and be a part of a company.”

A few months ago four board opportunities arose simultaneously for Maggie Chan Jones, founder and CEO of Tenshey Inc., which focuses on advancing gender equality in the workplace. Ms. Chan Jones recently finished Harvard Business School’s corporate director certificate program geared toward current board members and said she found the program helpful as a newer director.

“Representing women of color on boards also comes with our own pressures and public expectations because there are so few of us and you want to represent in the best possible way,” said Ms. Chan Jones, who is on two boards.

Despite recent director additions, a little over three-quarters of S&P 500 board members are white and 70% are men, according to Spencer Stuart. Changing board demographics is something that is likely to take years at current rates.

Companies boosting their diversity often are adding new seats rather than replacing existing directors, Spencer Stuart found earlier this fall. A PricewaterhouseCoopers survey found that 60% of executives said a reluctance among directors to retire makes it harder to increase board diversity.

Starting Saturday, public companies based in California must include at least one director who identifies as Black, Latino, Asian, Pacific Islander or Native American or as gay, lesbian, bisexual or transgender. A separate state measure already requires those companies to have at least one woman on their boards. Both rules allow for $100,000 penalties for initial violations, and both face legal challenges.

In 2021, women made up half of all new directors added to California companies’ boards, according to a mid-December report from California Partners Project, an advocacy group for gender equality. After those appointments, about 30% of the 6,225 public-company board seats were held by women, the group found.