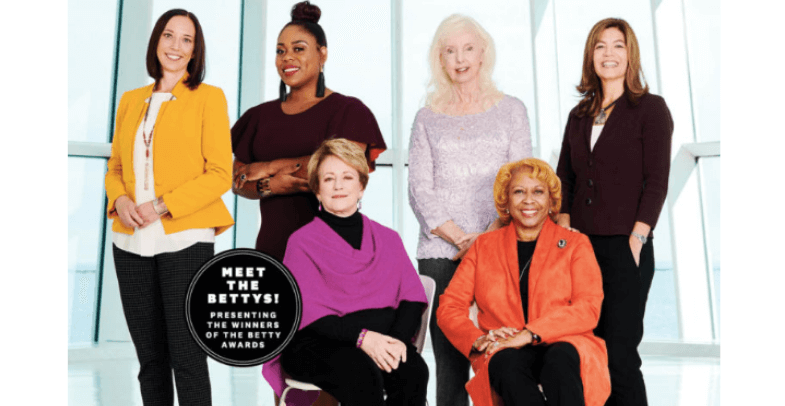 MEET THE WINNERS OF OUR FIRST ANNUAL BETTY AWARDS

Here we honor six outstanding women, each representing a facet of our late former publisher, Betty Ewens Quadracci, and gather them for a conversation.

When we decided to publish our first women’s issue, there was one clear place to start: Betty Quadracci. For many, the late Quadracci was not only synonymous with this magazine, which she oversaw as publisher from 1983 to 2013, but the city itself. Quadracci’s impact on Milwaukee and its residents was indelible. But rather than focus on the Quad co-founder’s achievements, we decided to celebrate her legacy by casting a light on those who carry it forward.Enter: The Betty Awards.

They began with a call for nominations in late July. The goal was to find a group of women who, individually and collectively, reflected Quadracci’s grit, guts and compassion. By August, we had received more than 150 nominations. Two rounds of judging followed – first internally and later by those who knew Quadracci best.

The result is a group of six awe-inspiring women who together form a powerful bunch. They include an opera singer turned conductor, a former United Nations representative and a brick-laying nun. Like Quadracci, all six work to make Milwaukee a better place.On a clear, warm fall day, the late-morning light bathing the Milwaukee Art Museum in a celestial glow, the inaugural Betty class convened with MilMag editor and publisher Carole Nicksin to discuss women in the workplace, daily affirmations and the city they all love.

THE STANDOUT SISTER: A WOMAN KNOWN FOR HER SUPPORT OF OTHER WOMEN

IF DR. JOAN PRINCE had a motto, it would be the first two lines from the Sister Sledge song: “We are family. I got all my sisters with me.” It’s not only the words of “We Are Family” that parallel Prince’s celebration of women, but also the ebullient enthusiasm that springs from boosting one another up.While her resume is nothing short of formidable – a doctorate degree in urban education, 20 years as vice chancellor at UW-Milwaukee  and a yearlong appointment as the first Wisconsinite to represent the United States at the General Assembly of the United Nations – her list of accomplishments only measures one form of Prince’s success.

For 65-year-old Prince, getting through the door is just the first step. “It’s our job to advance other women. It
comes with the territory,” says Prince, who has had female mentors from a young age and been involved in the upper ranks of multiple professional women’s organizations. “Why would you not push someone else up because your expiration date will come.” But until that day arrives, Prince will keep doing what she’s doing.