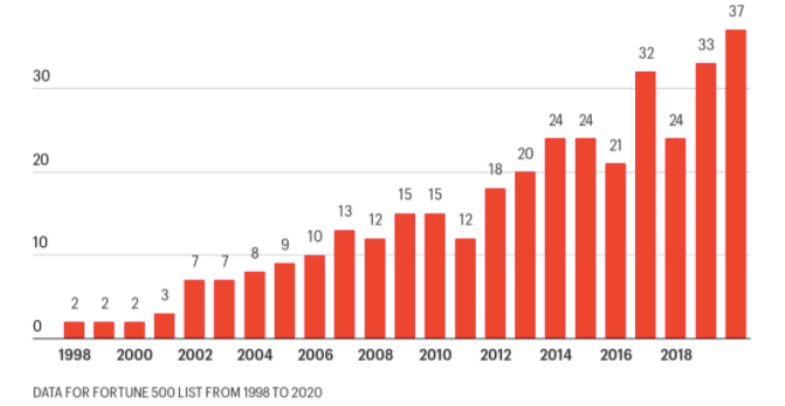 Female CEOs in the Fortune 500

For that reason, the number of female chief executives on the list is closely watched statistic among those who track gender diversity in board rooms and C-suites across the country.

This year’s tally soundly beats last year’s 33, which was itself a new record. Yet the big picture is less encouraging: even with a record 37 female CEOs, women run just 7.4% of the 500 businesses on the ranking. (For perspective: Twenty years ago, women ran two.) Only in the past four years has the growth of women in these roles accelerated past 30—a general upwards trend, though there have been dips along the way.

The number of women running Fortune 500 companies is influenced by several factors, including executive leadership changes and companies either growing to make the list for the first time, or shrinking to fall off of it. So while the ever-vacillating number is not a scientific assessment of the state of women in American business, it does provide a useful snapshot.

Some of this year’s new additions arrived on the list after taking over Fortune 500 companies from male predecessors in the past year. Carol Tomé, a longtime Home Depot executive, will begin her run as CEO of UPS on June 1. Heyward Donigan, a veteran health care executive, became CEO of Rite Aid in August 2019—in time to keep the drug store running through the pressures of the coronavirus pandemic. After Gap Inc. scuttled a plan to spin off Old Navy into what would have been a standalone Fortune 500 company, Sonia Syngal, who had been tapped to run that business, was instead promoted to run the entire corporation. Kristin C. Peck became chief executive of the $6.3 billion animal health company Zoetis in January. And Jennifer Johnson took over her family business, the $5.8 billion investment manager Franklin Resources, from her brother in February.

Some women among the group of 37 are leaders of companies that broke into the Fortune 500 for the first time this year (the revenue threshold for a company to make the list was $5.7 billion). That group includes Barbara R. Smith, the CEO of $5.8 billion materials business Commercial Metals, and Nazzic S. Keene, CEO of the $6.4 billion government information technology company Science Applications International.

Within the ranks of the 37 women who make up this list, a longstanding problem persists: there is starkly little racial diversity. Only three of the 37 are women of color: Gap Inc.’s Syngal, Advanced Micro Devices CEO Lisa Su, and Yum China CEO Joey Wat.

Not one of the 500 companies on the list has a black woman at the helm. That’s a drop-off from last year, when Mary Winston, interim CEO of Bed, Bath, and Beyond, was the only black woman among these chief executives; she has since been replaced with a permanent CEO. No Latinas are in these roles either. (Past black and Latina Fortune 500 female chiefs include former Xerox CEO Ursula Burns and former PG&E CEO Geisha Williams.)

There are some familiar names missing from the list of female Fortune 500 chiefs this year. Eight-year IBM CEO Ginni Rometty stepped down in April; she is now serving as chairman through the end of 2020. As of June 15, Marillyn Hewson will no longer be CEO of Lockheed Martin; when she assumed the job in 2013, she became the first woman to run America’s biggest defense contractor. KeyCorp CEO Beth Mooney left her role of nearly a decade in May, while Melisa Miller lasted just five months as chief executive of $6.6 billion Alliance Data Systems.

Other changes of note in the past year include Safra Catz’s leadership at Oracle; she is now the sole CEO of the company after the death of her co-CEO Mark Hurd. At AutoNation, the country’s largest dealership chain, CEO Cheryl Miller is on a health-related leave of absence but is still included in this tally. And Judy Marks is the CEO of $13 billion Otis Elevator, but a technicality prevents her from being included in this group. Otis spun off from Raytheon Technologies in April, a development not considered for this year’s Fortune 500, which is based on the 2019 fiscal year; if Marks is still in charge of the new standalone company when it is expected to make the Fortune 500 this time next year, she will be added to the list.

While the overall picture—that women run 7.4% of the businesses on the Fortune 500—is significant, there are some more micro trends worth noting. Many of these women leaders are concentrated at the bottom of the Fortune 500, where the companies are smaller. Only seven women run Fortune 100 companies; Mary Barra, CEO of the $137 billion auto giant General Motors, runs the largest. Several female CEOs are concentrated in retail, from Corie Barry’s Best Buy to Barbara Rentler’s Ross Stores to Laura Alber’s Williams-Sonoma, while female leadership among the Fortune 500’s tech companies remains rare.