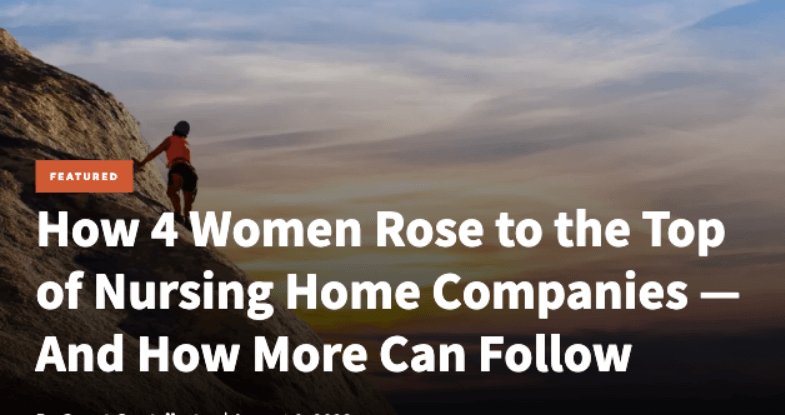 How Four Women Rose to the Top | Healthcare

As the staffing crisis continues to challenge nursing home leaders across the sector, the hundreds of thousands of workers lost over the course of the pandemic may leave a bigger hole in the industry beyond the ability to fill shifts and accept new patients.

Specifically, some executives worry about a dwindling number of future female leaders.

“In the health care sector we lost 400,000 employees, almost 20% of our workforce,” Kimberly Townsend, CEO of Loretto, told Skilled Nursing News. “And that’s really unfortunate, because a lot of them were in our pipeline of women leaders for the future.”

Current data about female representation at the C-suite level of the nursing home industry is limited, but what does exist points to a gender gap that hasn’t budged in years.

Of the 20 largest skilled nursing providers in the United States, only four are now led by women – a stark contrast to the frontline staff who primarily identify as female.

And that trend continues across the health care field. Even though almost 80% of the overall health care workforce are women, only 19% of hospitals are led by women and only 4% of health care companies have a female CEO, according to data compiled by management consulting firm Korn Ferry.

At Trilogy Health Services, women make up 85% of the workforce, according to CEO Leigh Ann Barney.

Trilogy’s C-suite is also 60% female as of July, per a company spokesperson. One of the reasons Trilogy has been able to achieve that is through an “intentional” leadership development program that has formal education growth steps for all employees throughout the company, according to Barney.

“So you don’t just leave it to chance that someone’s going to grow into a position,” she said. “You have to ask people what they want.”

“We are seeing more and more women rising through the ranks and it is great to see,” she told SNN.

Prior to joining Genesis, Powell served as president and COO of the Allure Group, a SNF chain in New York City.

When she was developing her career, Powell oftentimes found it challenging to be heard. That has since changed, but it took learning how to better articulate her perspectives and be more strategic in her presentation.

The company is 100% women owned with a high number of women in all leadership roles, including a mostly women-led executive leadership team, according to Hennessy.

“We strive to be a family-friendly company and know that being great moms and dads is important to many of our team members, and to me that ties back into female leadership,” she said.

Recruiting women into the C-suite level is good for business too. Research indicates that gender diverse boardrooms generate about 30% more revenue per employee compared to competitors. Skilled Nursing News was unable to find data on the number of transgender or gender nonconforming skilled nursing leaders in the industry.

Barney noted the gender makeup of skilled nursing boardrooms can be especially important for the company because “more of our customers are female than male.”

Part of the reason is life expectancy: women live an average of five years longer than men in the U.S. Some research also indicates that women live slightly longer in some nursing home environments than men.

The demand for safe places for female residents is so great in some instances that it led one skilled nursing and rehab community to open a 24-bed, women-only memory care unit as part of its skilled nursing campus.

StoneGate opened the unit within the Williamsburg Village Healthcare community in De Soto, Texas in 2018. Single-sex communities like these are a small but growing part of the industry which some experts believe may also help LGBTQ+ residents.

Hennessey noted that in addition to more female customers than male customers, the skilled nursing industry is often staffed by female frontline workers who are also caregivers for multiple generations of their own families.

“People don’t like to say it, but men and women bring different perspectives to organizations and strategies — this may be cultural, or even biological,” Hennessey said. “It is important that all views are represented in leadership.”

There are a variety of barriers that can impede women working in the industry from rising up to the C-suite level, including the lack of affordable child care and paid parental leave, to unequal opportunities offered to women in the first place.

All four CEOs emphasized the importance of leadership development programs to retain women as well as benefits like flexible scheduling and competitive pay to attract working hires as they may have caretaking responsibilities of their own at home.

Additionally, Townsend said the company also donates 13,000 diapers to employees each month to help care for them and their families.

Health Dimensions Group offers same-day pay with no interest, which Hennessey said was “very important” to them.

Genesis has a diversity, equity and inclusion (DEI) committee that Powell says is focusing on finding ways to make employees as well as patients and visitors “feel celebrated and welcomed.”

Genesis also offers tuition assistance, onsite and virtual training, mentorship and other opportunities to move up the career ladder.

But for now, the group of female CEOs is still small enough that there’s an informal email group to chat through problems, like COVID-19 challenges, and receive support, according to Trilogy’s Barney.

“I know we’re talking about women helping women here, but you know, it’s really everybody helping everybody grow,” Barney said. “I think it’s incumbent on us to look wherever we can for the right leaders.”

Powell would like to see more industry workshops and programs to develop women’s leadership skills and confidence. Just a few months ago Powell spoke at LTC 100’s first ever all-female executive panel.

Hennessey said despite the challenges surrounding Covid-19, staffing shortages, inflation and increasing regulation, she thought there was a “bright future” for the industry, and particularly, the women in it.

“This growth in demand, our rising to meet the needs of the country, and the many lives we will improve will be in large part to women in leadership and providing the direct care and services our residents need,” she said.