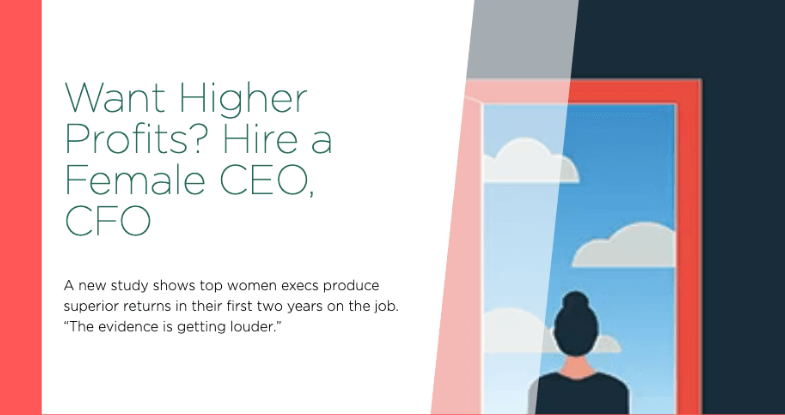 Korn Ferry l The evidence is getting louder

Diversity at the top, it seems, can pay. The issue of making leadership more diverse remains.

Firms with female CEOs and CFOs produce superior stock price performance, compared to the market average, and firms with a high gender diversity on their board of directors are more profitable and larger than firms with low gender diversity, according to a new study from S&P Global Market Intelligence. “As we look at financial performance, this research is yet another confirmation that women provide significant and positive value through C-suite and board leadership positions,” said Doug Peterson, president and CEO of S&P Global.

According to the study, firms with female CEOs saw a 20% increase in stock price momentum, a measure of positive price trend, compared to their male counterparts in the executives’ first 24 months in office.

Female CFO’s brought an even more significant impact. Companies that appointed a woman to the top finance role saw a 6% increase in profitability and 8% larger stock returns during the first 24 months in office. Over the 17-year period for the study, firms with female CFOs generated $1.8 trillion more in gross profit than their sector average.

“The evidence is getting louder,” says Beatrice Grech-Cumbo, head of Korn Ferry’s Advancing Women Worldwide initiative. The study, she noted, builds on prior research indicating that organizations which more inclusive teams, such as women in leadership positions, get better performance from individuals, teams and entire organizations. Those diverse groups are more likely to produce innovative products and deliver them faster to the market than non-diverse groups. “We really believe that organizations making this change see it as a source of value creation. They don’t just see it as the right thing to do,” she says.

S&P looked at the firms listed in the broad-based Russell 3000 stock index. It analyzed the performance after 5,825 new executive appointments, of which 578 were female, since 2002. S&P didn’t find anything that the female leaders were doing anything particularly differently from their male counterparts, but speculated that the women who were being appointed to top jobs were the “tip of the spear,” executives whose abilities and traits were far above those of average leaders.

That echoes the conclusions from Korn Ferry’s extensive analysis of 58 women who have led large US corporations. The women were in the top 1% in 17 of 20 key leadership traits, says Shannon Hassler, a principal in Advancing Women Worldwide.

But while many organizations have committed to diversifying their leadership bases, as a group they haven’t gotten very far. As of the end of 2018, there were 19 male CEOs for every female CEO and more than six male CFOs for every female CFO. It’s a stark contrast to broader employment demographics, where about half the workforce of large US-based corporations are women. A common complaint in Corporate America has been that companies have difficulty finding women with the right experience to fill open leadership and board director positions.

Grech-Cumbo says all organizations can remove barriers to get more women into the leadership pipeline. For instance, giving high-potential talent P&L responsibilities, roles not often given to women or non-white men, is an effective way to broaden skills and prepare them to succeed in even larger roles. And, she adds, Organizations must recognize that just having diverse voices within leadership brings about clear business benefits.