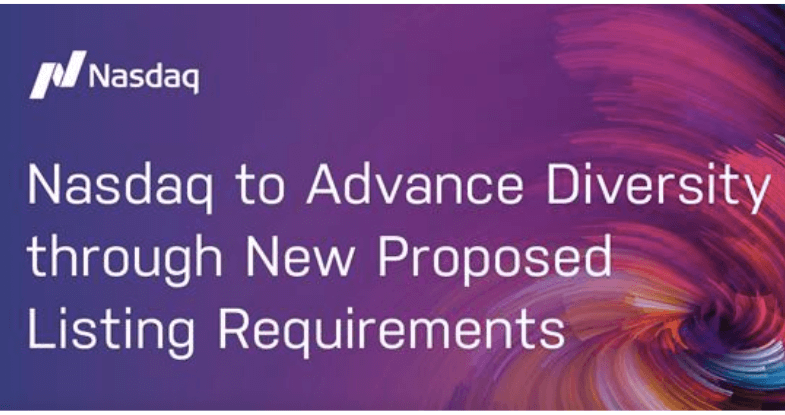 Nasdaq is pushing for greater diversity among the more than 3,000 companies listed on its exchange.

The exchange operator filed a proposal Tuesday asking the Securities and Exchange Commission to approve new listing rules surrounding the makeup of companies’ boards of directors, as well as greater transparency around who fills the seats in the boardroom.

Under the proposal, the majority of companies will be required to have at least two diverse board directors: one woman and one person who identifies as either an underrepresented minority or LGBTQ. If a company cannot meet these requirements, it will not be delisted, but it will need to explain why it cannot satisfy the goals. Failure to publish board data, however, could result in delisting.

Should the SEC approves the plan, all companies would have to disclose board-level diversity statistics within one year of the policy being passed. Nasdaq said in a statement that the time frame for companies to meet the board requirements will depend on each company’s listing tier, but that all companies will be expected to have at least one diverse director within two years of the SEC’s approval.

“Disclosure is really the foundation of our markets and our economy,” Nasdaq President and CEO Adena Friedman told CNBC’s “Squawk Box.” “We rely on companies to make full and accurate disclosures to inform investors so that investors can make their own decisions as to which companies they want to invest in and what they expect of the companies where they’re an investor.”

More than 75% of the exchange’s roughly 3,200 companies do not meet the criteria, according to a New York Times story citing data from Nasdaq

The push from Nasdaq — the first exchange that has called for the implementation of diversity requirements — comes amid a boom in so-called ESG investing — when a company’s environmental, social and governance factors are evaluated. With ESG funds seeing record inflows, companies are taking note. In January, Goldman Sachs announced that it will not take companies public without “at least one diverse board candidate.”

Nasdaq’s proposal follows countless studies touting the benefits of greater diversity at the board level and throughout companies more broadly. In a 2019 study McKinsey found that companies in the top quartile of gender diversity on executive teams were 25% more likely to experience above-average profitability compared with companies in the bottom quartile.

“We are taking the leadership here because there has been so little action on this front and we do think it’s an important thing for us to do — to create a more inclusive capitalist society and we think this is a step forward,” Friedman said.