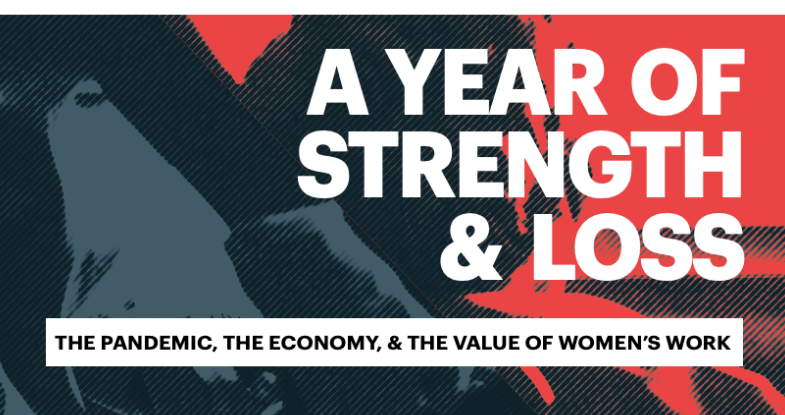 A message from Fatima Goss Graves, president and CEO of the National Women’s Law Center, “After a year of living under the debilitating effects of the coronavirus pandemic, we are only just beginning to understand its true cost to our society and our economy.”

We entered this crisis a divided and unequal country, one rife with gender and racial disparities that continue to shape who is impacted and how. The pandemic accelerated trends women have long fought to reverse, pushing hundreds of thousands out of the labor force even as we all relied on the unpaid and underpaid labor of women as essential workers, as caregivers, and as parents. Black, Latina, Native, and Asian-American women continue to bear the brunt of this pain with minimal recognition, despite serving as the backbone for our economy, our democracy, and our society.

Women’s History Month traditionally celebrates all that women have done, but this year we are celebrating all that women continue to do. We’ve seen how women fuel our country and yet, we’ve also witnessed that when their collective well-being is an afterthought, we are all harmed. No one prospers when states escalate attacks on reproductive freedom, or when institutions from our schools to the media continue to fail survivors of sexual violence. Our entire nation suffers deeply when women are forced out of work and not paid equally, and when our care infrastructure collapses. The last year has been a case study of what happens to the country when women are constantly forced to prove our individual resilience and our perseverance in the face of adversity. We say enough is enough–and we need future-forward laws and policies that say the same.

“Statistics like those in this report can only tell part of the story of the past year. We know the true impact of this pandemic is felt not in a bar graph or pie chart but in the daily tears shed, the futures long-deferred, and the more than half a million lives lost. So let me say this clearly and directly to the women of this country: You’ve earned far more than you’ve been given. You have fought for the world even when the world never seems to fight for you. Though it may not always feel like it, I want you to know the Law Center hears you. We hear your stress, your fear, and your rage. And every day it is our great privilege to fight for the safety, equity, and justice you deserve.”

The impact of COVID-19 on women

Women were struggling to make ends meet before the COVID-19 pandemic ever started.

Women made up about two-thirds of workers making minimum wage in 2019.

In 2019, women made 82 cents for every dollar men made and compared to white, non-Hispanic men:
• Black women made 63 cents;
• Latinas made 55 cents; and
• Native American women made 60 cents.

863,000 women left the labor force in September 2020 alone. Outside of March and April 2020, this is the single largest one-month exit of women from the labor force since this data has been collected. The next largest exit was of 550,000 women in January 1968.

Black women’s labor force participation rate was 59.7 percent in February 2021. Before the pandemic, the last time their rate was this low was in 1993.

Women are bearing the brunt of pandemic-related job loss.
Women lost more than 12.2 million jobs from February 2020 through April 2020, 11.3 million of which were in April alone, which means one month of the pandemic’s losses wiped out nearly an entire decade of women’s job gains since the Great Recession.12 In February 2021, women were still short nearly 5.1 million jobs compared to February 2020.

Nearly eight in 10 of the nearly 5.1 million net jobs women have lost in the past year were in the following four industries: leisure and hospitality (36.4 percent), education and health (20.2 percent), government (15.9 percent), and retail (7.0 percent).