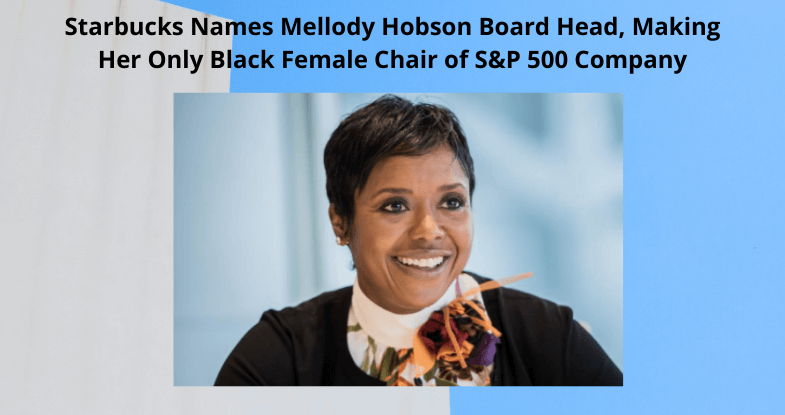 Currently serving as vice chair of the Starbucks board of directors, Hobson will succeed current chair, Myron E. Ullman, III upon his retirement in March 2021

SEATTLE – Starbucks Corporation (NASDAQ: SBUX) today announced that Mellody Hobson will serve as the company’s next non-executive chair of its board of directors starting in March 2021. Hobson, who first joined the board as an independent director in 2005 and was appointed as the board’s independent vice chair in 2018, will succeed Myron (Mike) E. Ullman, III. Ullman, who has served on the board since 2003 and has served as its chair since 2018, will retire from the board in March 2021, and Hobson will assume the role of chair in connection with the Starbucks Annual Meeting of Shareholders in March 2021.

“It has been remarkable to be a part of the Starbucks board for nearly 18 years as this enduring company has grown with a mindset of prioritizing its people and its customers,” said Ullman. “It also has been an honor to serve as the chair of the Starbucks board, and to support and oversee the relationships of trust built with our stakeholders. With its Mission and Values as its guide, I am confident in the future of the company.”

“From the very beginning, I set out to build a different kind of company- one in which all decisions were to be made through the lens of humanity,” said Howard Schultz, Starbucks modern day founder and chairman emeritus. “As a member of the board for the last 18 years and board chair since my departure, Mike has been instrumental in ensuring Starbucks answers its higher calling to be a different kind of public company.  I am grateful to him for all his contributions and his enduring partnership to me and to Starbucks. Mellody has been a trusted advisor to me and the company for more than20 years. She is a fearless leader defined by her grace and wisdom. She has long embraced the purpose of Starbucks and, along with the leadership team, will continue to reimagine Starbucks future through the foundation of its past.  My heart is full and thankful that Starbucks will have Mellody’s leadership as chair.”

In addition to serving over 15 years on the Starbucks board of directors, Hobson is the co-CEO of Ariel Investments, LLC, a global value-based asset management firm. In this role, she is responsible for management, strategic planning and growth for all areas of Ariel Investments outside of research and portfolio management. Additionally, she serves as Chairman of the Board of the company’s publicly traded mutual funds. Prior to being named Co-CEO, Hobson spent nearly two decades as the firm’s President. Beyond Starbucks, she has brought invaluable experience to boardrooms across the nation. She currently serves as a director of JPMorgan Chase. Hobson is also a past director of Estée Lauder Companies and served as Chairman of the Board of DreamWorks Animation until the company’s sale.

“I am thrilled and honored to take on the role of chair,” said Hobson. “Over nearly two decades, I have seen the company continue to elevate and transform its business – adapting to various market environments and evolving consumer trends. I look forward to working with the board and talented leadership team on accelerating our strategy, supporting our valued partners, and continuing to create significant value for all of our stakeholders.” Hobson continued, “On behalf of the board, I would also like to thank Mike for his strong leadership, and all of his invaluable contributions.”

Hobson also serves as Chairman of After School Matters, a Chicago non-profit that provides area teens with high-quality after school and summer programs. Additionally, she is vice chair of World Business Chicago; co-chair of the Lucas Museum of Narrative Art; and a board member of the George Lucas Education Foundation and the Los Angeles County Museum of Art (LACMA). She is a member of The Rockefeller Foundation Board of Trustees and serves on the executive committee of the Investment Company Institute.

Hobson earned her AB from Princeton University’s School of Public and International Affairs. In 2019, she was awarded the University’s highest honor, the Woodrow Wilson Award, presented annually to a Princeton graduate whose career embodies a commitment to national service. She has also received honorary doctorate degrees from Howard University, Johns Hopkins University, St. Mary’s College, and the University of Southern California. In 2015, Time Magazine named her one of the “100 Most Influential People” in the world.

Since 1971, Starbucks Coffee Company has been committed to ethically sourcing and roasting high-quality arabica coffee.  Today, with more than 32,000 stores around the globe, the company is the premier roaster and retailer of specialty coffee in the world.  Through our unwavering commitment to excellence and our guiding principles, we bring the unique Starbucks Experience to life for every customer through every cup.  To share in the experience, please visit us in our stores or online at stories.starbucks.com or www.starbucks.com.