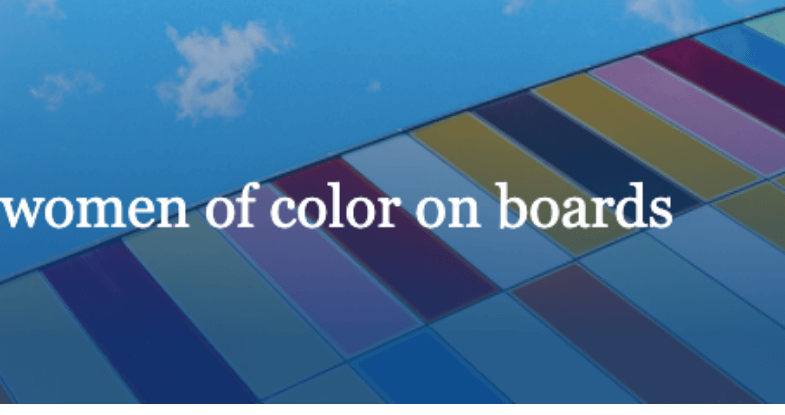 Tackling the underrepresentation of women of color on boards

With the passage of SB 826 in 2018, California became the first state to mandate board gender diversity.

In 2020, the California Partners Project, which was founded by California’s current First Lady, released a progress report on women’s representation on boards of California public companies, tracking the changes in gender diversity on California boards since enactment of the law.  That same year,  AB 979 was signed into law in California.  That bill was designed to do for “underrepresented communities” on boards of directors what SB 826 did for board gender diversity. (See this PubCo post.) The CPP has just released a new report that not only updates its 2020 progress report on board gender diversity, but also provides data on women of color on California’s public company boards.  The takeaway is that, while there has been tremendous progress in increasing the number of women on boards, nevertheless, much work remains “to tap all of our talent and achieve racial and cultural equity. Most women on California’s corporate boards are white, while women of color—especially Latinas—remain severely underrepresented.”  In addition to new data, the report offers some strategies for overcoming these deficits in diversity.

California has adopted two board diversity statutes.  The first, SB 826 requires that publicly held companies (defined as corporations listed on major U.S. stock exchanges) with principal executive offices located in California, no matter where they are incorporated, include minimum numbers of women on their boards of directors. Under the law, each of these publicly held companies was required to have a minimum of one woman on its board of directors by the close of 2019. That minimum increases to two by December 31, 2021, if the corporation has five directors, and to three women directors if the corporation has six or more directors (see this PubCo post).

The CPP report looked at diversity of the boards of 717 publicly traded companies, listed on the NYSE, Nasdaq or NYSE American exchanges, with “principal executive offices” located in California, as reported on their most recent Forms 10-K or 424(b)(4). Data was collected by consultant Equilar from regulatory filings, such as  proxy statements and Forms 8-K as of March 2021. Race and ethnicity were identified using data from Equilar and from The Latino Corporate Directors Association, along with publicly available information, and based on the director’s self-identification, name, biography, affiliations and other resources. Notably, the report highlights the challenge of reporting data regarding women of color, given that companies are not required to report information about directors’ race or ethnicity.

According to the new report, as of March 1, 2021, there were 717 public companies headquartered in California (678, excluding SPACs), reflecting a 10% increase in the number since June 30, 2020. The CPP determined that there were 5,599 board seats at those companies, with 1,483, or 26.5%, held by women, compared to 766, of 15.5%, held by women in 2018.   The CPP analysis showed that 38% of subject companies “already meet the end of 2021 gender requirement, and 41% need to add one more woman director to do so.” Twenty-one percent need to add two or more women to satisfy the 2021 requirement.  Interestingly, the CPP reports that smaller public companies, which historically have had the least diverse boards, are catching up, with 93% of California’s 142 publicly traded microcap companies having at least one woman on their boards, almost doubling the 47% found in 2018.  California’s 39 SPACs are apparently laggards with 12.8% all-male boards, compared to 1.3% for other California public companies (a decrease from 29% in 2018). On the other hand, only 1.5% of California public companies have boards composed of a majority of women directors, while 96.9% are majority men and 1.6% have gender parity.

You may be puzzled as to why the data in the 2021 report on SB 826 published by the California Secretary of State is so different? There are at least two reasons for that.  First, the report from the Secretary is based on data from the 2020 California Publicly Traded Corporate Disclosure Statements filed with the state by companies; however, it appears that only about half of companies actually filed the report. The CPP used data from a variety of sources. Second, to compile its report, the Secretary can’t simply look at companies’ proxy statements and Forms 8-K as the CPP did  That’s because the language in the statute defines “female” as “an individual who self-identifies her gender as a woman, without regard to the individual’s designated sex at birth.” As a result, the Secretary did not review 10-Ks or proxy statements to determine whether a company is compliant with the new board composition requirement, but instead reported data based only on the California Statement, which includes a specific inquiry regarding the number of “female” directors. (See this PubCo post.)

The report states that, if the number of board seats at each company remains the same, SB 826 would require that 2,046 board seats be filled by women directors by the end of 2021, leaving at least 563 more board seats to fill with women directors by the end of 2021.  According to the report, in “the two years before SB 826 was enacted, just 208 corporate board seats were newly filled by women. In the two years since, that number grew to 739. And in the first quarter of 2021, women filled 45% of public company board appointments in California, an indicator that women’s representation on boards is on the rise.”

The vast majority of directors (81.2%) continue to be White, and, in Q1 2021, 25.7% of California companies had all White boards, although that percentile reflects a 5.5% decrease from the previous quarter. White women hold 20.2% of all board seats, while representing 18.5% of the total state population. AAPI women make up 7.8% of the total state population but hold only 3.3% of the directors, Black women constitute 3.5% of the population but hold only 2% of the board seats and 2% of the population are women of other ethnicities, such as Native American or Middle Eastern, who hold only 0.3% of the board seats. From July 1, 2020 through March 31, 2021, new appointments of women directors were 63% White, 17% AAPI, 14% Black, 4.5% Latinas and 1.5% other ethnicities.

What are some strategies to overcome these diversity deficits? To get some thoughts on these issues, the CPP convened focus groups composed of 46 business leaders, investors and experts in board diversity and governance.  The following were some of the strategies the CPP gleaned from these focus groups (italics added):

In its proposal to impose a comply-or-explain mandate for board diversity, Nasdaq expressed concern that “boards lacking diversity can inadvertently suffer from ‘groupthink,’ which is ‘a dysfunctional mode of group decision making characterized by a reduction in independent critical thinking and a relentless striving for unanimity among members.’” Nasdaq said that studies suggest that “board diversity can indeed enhance a company’s ability to monitor management by reducing ‘groupthink,’” lead to robust dialogue and better decision-making. Nasdaq concluded that cognitive diversity is particularly important for boards because of their “advisory role, especially related to corporate strategy.”

This article from the Harvard Business Review, Adding Women to the C-Suite Changes How Companies Think, reports on a study by three academics on the impact of adding women to the C-Suite—not just whether the businesses performed better, but why they performed better. In other words, “[w]hat are the specific mechanisms that drive the positive business outcomes associated with increasing the number of women in the C-suite?” According to the authors, much past research has revealed that companies with more women executives “are more profitable, more socially responsible, and provide safer, higher-quality customer experiences.” But why is that the case? To find out, the authors looked at a narrower question of how the addition of women to top management teams changed companies’ “strategic approach to innovation”?  The authors concluded that the addition of women executives to the management team brought more than “new perspectives”—they “actually shift how the C-suite thinks about innovation, ultimately enabling these firms to consider a wider variety of strategies for creating value.”

After the appointment of women executives, the authors identified several changes in firms’ strategic approaches: first, the authors found that companies “became both more open to change and less risk-seeking. In other words, these organizations increasingly embraced transformation while seeking to reduce the risks associated with it.” The authors also found that, as a result of the companies’ increased reluctance to take on risk, their strategy shifted from a focus on M&A, which the authors characterized as a “knowledge-buying strategy,” toward a focus on R&D, which the authors characterized as a more collaborative “knowledge-building strategy.” In addition, the authors reported that the better women were integrated into the executive team, the greater their impact.

Similarly, a 2018 study from the BCG Henderson Institute looked at the relationship between diverse leadership teams and innovation. The study concluded that “increasing the diversity of leadership teams leads to more and better innovation and improved financial performance.”  Why? Because “people with different backgrounds and experiences often see the same problem in different ways and come up with different solutions, increasing the odds that one of those solutions will be a hit.” Companies that reported above-average diversity on their management teams also reported innovation revenue that was 19 percentage points higher than that of companies with below-average leadership diversity—45% of total revenue versus just 26%….In other words, nearly half the revenue of companies with more diverse leadership comes from products and services launched in the past three years.” The study also showed that these companies reported better financial performance, with EBIT margins nine percentage points higher than companies with below-average management diversity. (See this PubCo post.)

Tackling the underrepresentation of women of color on boards