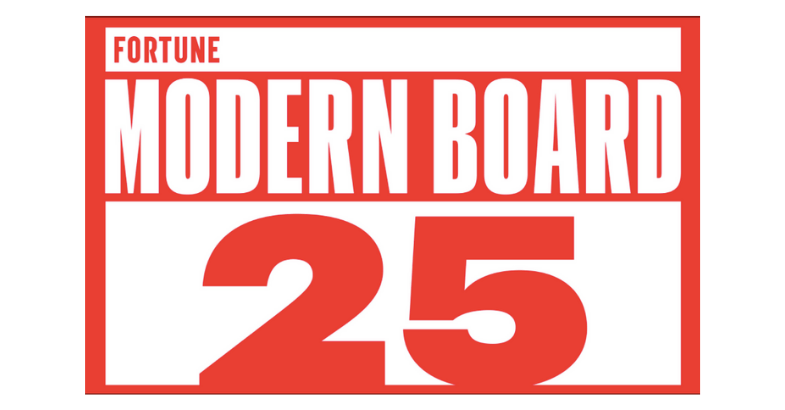 The 25 companies with the most innovative corporate boards

The business world is changing rapidly, and so must its top leadership. That’s the principle that drives Fortune‘s new ranking, The Modern Board 25 list. The two-plus years since the COVID-19 outbreak began have required board leaders to prioritize agility in the face of constant change, socioeconomic volatility, and technologically driven disruption.

Boards are taking on a more active role in corporate affairs, weighing in more often on matters like succession, diversity, recruiting, and environmental impact. And while overseeing and advising a company’s executive tier remains priority No. 1, boards are elevating purpose to be in line with profit in an effort to future-proof their companies.

As a result, the very way in which boards operate has also changed. They’re meeting more often: For the S&P 500, board meetings increased 19% in 2021. They’re dealing with more disputes, as evidenced by a recent survey in which 47% of board leaders said they wished that a fellow director would quit. They’re embracing new skill sets such as technology, cybersecurity, and people operations. And they’re facing growing pressure to act on ESG (environmental, social, and governance) factors as companies pivot to maximizing stakeholder welfare, rather than shareholder value only.

The pandemic has accelerated many of these trends, along with catalyzing increased societal and regulatory scrutiny. Yet some boards are doing far more than just adhering to good-governance rules. They’re prioritizing engagement and transparency with multiple stakeholders, and advancing their understanding of how ESG issues tie into their company strategy and, ultimately, their bottom line.

With all these fundamental shifts in mind, Fortune on Tuesday launched its inaugural Modern Board 25 list, a ranking of the most innovative S&P 500 boards—boards whose companies are positioned for long-term success. The rankings are purely data-driven: We developed them in collaboration with the Diligent Institute, the research arm and think tank of the global corporate-governance software company Diligent, using corporate information gathered by Diligent and ESG data from Refinitiv.

For a company or industry to change, board leaders must fulfill their essential oversight role, while horizon-scanning, scenario-planning, and holding C-suites accountable for progress. The Modern Board 25 companies are ahead of their peers on those fronts.

A mix of industries

While many industries are represented on the Modern Board 25, tech, retail, financial services and health care have the biggest showings.

Tech companies took three of the top four spots, with Microsoft coming in at No. 1.

Walgreens (No. 3) and CVS (No. 13), which have been at the forefront of the country’s pandemic response, made the list, as did other companies that focus more exclusively on health care, including insurer Anthem (No. 7) and pharmaceutical giant Bristol-Myers Squibb (No. 23).

Several other retailer players appear, including Amazon at No. 10 and Walmart at No. 17. The financial services industry was represented by State Street, Citigroup and Goldman Sachs coming in at No. 14, 18, and 19, respectively.

Microsoft nabbed the top spot. Its board is one of the most diverse in the S&P 500; eight out of 12 members belong to underrepresented groups. It also boasts one of the highest ESG scores. The tech giant has been carbon neutral since 2012 and has pledged to be carbon-negative, water-positive, and zero-waste by 2030. The company’s most recent DEI report reveals that, from 2020 to 2021, Black representation across its U.S. workforce increased 1 percentage point, up to 5.7%, while their representation among executives increased two percentage points, to 5.6%.

According to the board effectiveness metrics provided by Diligent, many companies across the S&P 500 earned perfect scores or very high scores in board expertise, ideal board size, and CEO succession planning. High-ranking companies on the Modern Board 25 differentiated themselves by scoring high in gender diversity, age or nationality dispersion, and board independence—including having high numbers of directors who had never worked at the company and thus could maintain their objectivity.

While far from an underdog story, the appearance of both HP and Hewlett Packard Enterprise on our list is a nod to how quality leadership can stabilize companies—one of the main objectives of a corporate board.

Prior to 2014, the two companies were part of Hewlett-Packard, a Silicon Valley titan that was beset for much of the 2000s by scandals and controversies involving its board, as well as tanking financials. In 2014, the companies split, and both refreshed their top leadership, including at the board level. HP added Chip Bergh, CEO of Levi Strauss; Stacy Brown Philpot, COO of TaskRabbit; Stephanie Burns, former CEO of Dow Corning; and Subra Suresh, president of Carnegie Mellon University—all of whom who are all still on the board. Seven of the new board leaders HPE added after the split are still directors.

Today, both companies land on our Top 10—HPE at No. 2, and HP at No. 9—a sign of the difference boardroom leadership can make.