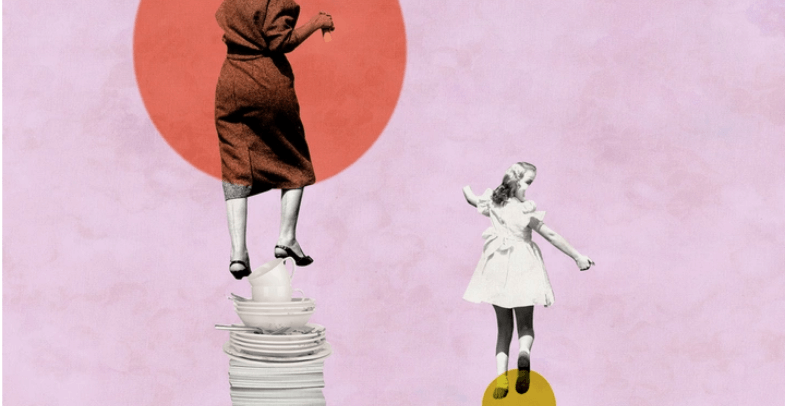 The Coming Setback for Women in the Workplace

Countries across Europe are setting out schedules for reopening businesses, yet schools remain closed. How will that work?

An executive at a major French cosmetics company told me she’s been running a team of 70 and overseeing her kids’ schooling while her husband, a nurse, works long hours treating coronavirus patients in a Paris hospital. Another executive, at an energy company, has been working full-time—as well as doing all the cooking and cleaning, and making sure her kids take their online classes—because her husband doesn’t pull his weight. The chief executive of a French lifestyle website and her partner have managed to take care of their young daughters only because she isn’t working full-time and has put her employees on France’s part-time-unemployment scheme.

All three say their career has been under strain since France went into lockdown in March. All three have struggled to balance responsibilities at home. And with restrictions slowly lifting, all three hope the government and the country’s workplaces will ensure that they and other women don’t burn out or leave the labor market.

France is an important bellwether in this respect. More than Germany and Italy, its extensive state child care and mandatory early-childhood education have helped keep female-employment levels high. But today, businesses are reopening nationwide while many schools are not. With women still the default caregivers for young children and aging parents, a disproportionate number of women might stay at home while men go back to work. The problem extends beyond France—a recent United Nations study warned that COVID-19 risked reversing decades of progress concerning gender equality in the workforce.

Governments play a huge role in shaping the labor market, through enforcing labor laws, providing paid time off, and requiring that workplaces offer parental leave. Yet policy makers must now consider another issue that affects whether women are able to go back to work: child care and reopening schools.

Sending kids back to school is, at present, a chaotic process that varies widely across Europe. France has so far opened schools only for some younger grades with reduced class size, and made attendance voluntary. Germany has opened largely for students finishing high school. Britain will reopen its schools for some grades starting in June, but Spain and Italy won’t reopen theirs at all this academic year. And yet all of these countries have been reopening their economy and businesses. How will this possibly work?

Even before the pandemic hit, gender imbalances in French households were pronounced. French women are “a walking paradox,” Garance Wattez-Richard, another executive at a major French company, told me. France has good infrastructure—tax breaks for parents and widespread state child care for children from the age of three months, as well as public pre-K and kindergarten. “You see a lot of very successful women who have three, four, even five kids—and they all weigh 36 kilos [85 pounds] and have perfect nails,” Wattez-Richard joked. “But at the same time what we’re still hiding is a form of inequality, because it’s not true that ultimately we’ve reached our objective … We’ve earned the freedom to have children and a successful career, but it’s still us doing a lot of the housework and cooking and cleaning.”

All the women I spoke with reiterated that sentiment. Céline Orjubin, the co-founder and CEO of My Little Paris, a lifestyle website, retreated to a family home with her partner and two daughters and put herself and her employees on part-time unemployment. Anne-Laure has had to cook and make sure her children, aged 8 and 18, do their homework, all while working remotely full-time from the south of France. “There’s no real share of the burden in our couple, to be honest,” she said, asking to withhold her last name and the name of her company so she could speak freely about her work and husband. “All of it is on me.” Carine, who also asked that she be identified by only her first name, has been working remotely from Paris while keeping an eye on her two kids so that her husband, a nurse, can make it to work. Early on in the lockdown, she stopped holding video meetings between 11:30 a.m. and 2:30 p.m. to let employees on her team care for their children and help them with lunch.

“My biggest worry,” Sophie Binet, who is in charge of women’s rights at the CGT labor union, told me, “is a violent return of women to the home.” Binet fears an erosion of the support offered to working mothers in France and elsewhere as countries, desperate to bring moribund economies back to life, look to reopen businesses without addressing shortfalls in child care. The longer schools are closed, the more women will “be forced to leave work,” she said. If women, who are mostly responsible for homeschooling, can’t take on additional work, “their careers will suffer”; “working-class women, or factory workers, are the most precarious, and they may have to leave the job market.” (At the other end of the age spectrum, nearly half of all COVID-19 deaths in France have been at retirement homes. If families stop entrusting their aging loved ones to such homes, the burden of taking care of the elderly will likely fall on women, too.) Even an ostensibly subtle shift will have consequences, leading to what Binet called a “German” system—schooling starts at age 6 in Germany, whereas France mandates it from age 3; German pre- and elementary school ends in the early afternoon, while France offers extensive public day care.