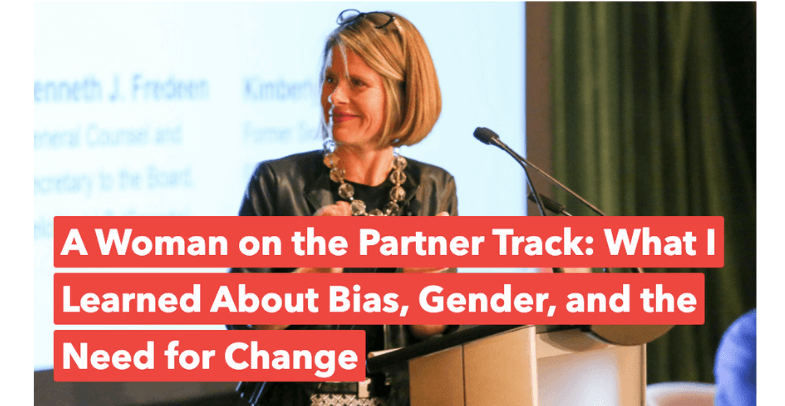 What I Learned About Bias, Gender, and the Need for Change

If I had to trace the moment when I became passionate about gender equality in the workplace, it would probably be when I was working at an executive search firm.

Five years into my tenure there, I was up for election to the firm’s partnership and was looking forward to contributing at that level. One day,  during the vetting process, I was called into the senior partner’s office, where he told me there was some concern that I, as a mother of two children, wouldn’t be able to keep up the pace of travel expected of partners in a global firm. “Don’t worry,” he said, “if things don’t work out this year then there’s always next year.”

But there were three problems with that:

I left the meeting in a quiet panic.  Then I sat down, I documented five years of business travel, and two days later I made my case.  And after some deliberations behind closed doors, I made partner.

But I kept thinking:  where had this “concern” come from? And why did it apply to me, a mother of two, and not to my colleague, a father of three? The answer, I realized, was that the roots of gender inequality in the workplace are deep, they are outdated, and they are often hidden or unconscious.  And we all need to challenge them.

Today in Canada, women represent 47% of the workforce and Canadian women earn a higher proportion of university degrees than Canadian men.

Yet according to the most recent review of TSX-listed companies, women occupy only 16% of board seats in Canada.  Even more sobering, 31% of issuers have NO women on their boards at all.

That means many companies reviewed by Canadian Securities Administrators still have a boardroom that looks like this:

The fact is, women continue to be underrepresented at leadership levels across almost every sector. A recent report from the World Economic Forum found that, at the current pace of change, it might take another 202 years to achieve workplace equality.

We MUST challenge this.

So how do we accelerate progress to achieve gender balance?

With the rise of movements such as #MeToo, #TimesUp, #HeforShe, and many others, society is finally listening to women’s voices urgently calling for fairness, respect, and equality.

Gender equality is squarely in the news and on the agendas of corporations everywhere. Change is happening in ways we haven’t seen before. Last year, I stood with the CEOs of 16 Canadian institutional investors representing over $2 trillion in assets as they pledged their commitment to advancing gender diversity on boards.

Sixteen CEOs instructed their investment teams to scrutinize the boards and management teams of their portfolio companies.
That’s a big deal.

But the only way to maintain this momentum is for all of us to take meaningful actions to advance gender equality in the workplace.

There are many ways to do this, but here are just two:

First, Engage Men.  Men run 95% of the world’s companies. Things will only change in the pursuit of gender equality if we engage these men with power—and those who are coming up behind them. As an example, my advisory board at Catalyst is made up of some of the most influential CEOs in Canada—men and women—who surprise and delight me every day with their engagement and commitment to our mission of advancing women in the workplace.

When I was challenged publicly last year about the “optics” of having a male Chair of my board, I pushed back hard. What I said was this: The fact that I, a strong female leader, can encourage a man with power to stand shoulder to shoulder with me and acknowledge that gender imbalance in society is as much his problem as it is mine is a big win.

This kind of joint leadership changes the conversation and is a critical factor in changing the game. Because this is not a women’s issue.  It is society’s issue.

Next, Sponsor a Woman.True sponsorship requires you to use your influence to help a protégé obtain high-visibility assignments, promotions, and development opportunities. It means reaching down into your organization, identifying talent, and pulling it upward, and it is perhaps the most concrete and actionable way to demonstrate your commitment to helping women succeed.   Take time to sponsor an emerging woman leaderand encourage others to do the same.

Despite my own experiences on the way to becoming partner, and a sometimes frustratingly slow pace of change, I am very hopeful.

We are in the midst of an extraordinary cultural movement.  It’s powerful and it’s here to stay.  The global activism we’re witnessing, the disruption we’re seeing, is not going away.   The message heard around the world is this:  “Women’s Rights are Human Rights.”

Now, more than ever, we have a tremendous opportunity to advance progress for women in pursuit of gender equality.   To motivate and unite colleagues, workplaces and industries to think, act and be gender inclusive.

Let’s all continue to press for progress.

As Executive Director, Tanya van Biesen is responsible for the growth of Catalyst in Canada, working closely with CEOs, senior executives, and Supporter organizations across the country to accelerate progress for women through workplace inclusion.  She is a recognized and accomplished executive with more than 20 years of experience in the…