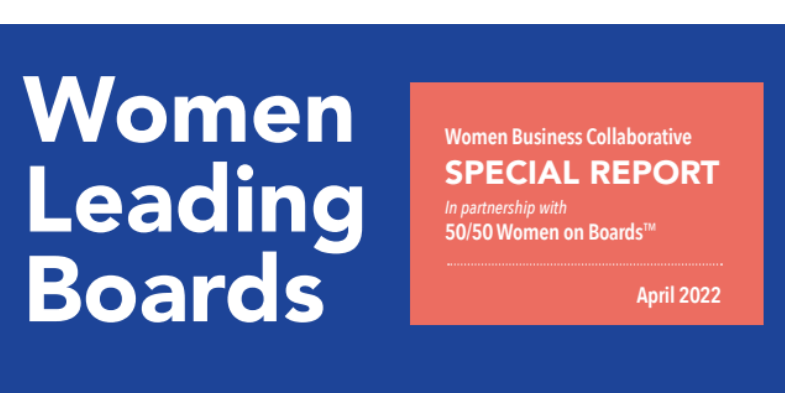 While the needle has clearly moved, is the recent increase in inclusive Directors & Officers (D&O) appointment practices enough?

Women Leading Boards provides an update on progress made over the past year; explains the impact of the shift; shines a spotlight on areas in which greater focus is required; and offers best practices to ensure the voices of women who currently sit on boards are being heard.

2021 was a watershed year for board diversity. Influenced by investor preferences, new and emerging U.S. regulations, as well as a wave of diversity advocacy amongst various stakeholders, the number of directors from underrepresented groups rose significantly.

A recent Women Business Collaborative report, Women Joining Public Boards, reveals that, of women who chose to self-disclose their race, Black / African American women take the lead in board appointments, closely followed by Asian /Pacific Islander women, however, Hispanic women, Middle Eastern / North African women, and multi-racial women continue to fall behind. Moreover, women held 27% of all board seats in 2021, up from 24% in 2020—the largest year-over-year increase among the Russell 3000 and far above the Russell 3000’s average annual increase of 2.14% for women on boards. Black board membership also spiked (32%), with a 30% rise in companies with Black directors.

To gain a holistic view of the progress made by women over the past year, Women Leading Boards, a special report from Women Business Collaborative (WBC) and 50/50 Women on Boards™ (WOB), assesses data from a variety of sources, including global benchmarks, the Russell 3000 Index, the Fortune and S&P 500s, as well as privately held companies. Although the surge in the appointment of Black directors is encouraging, Hispanic individuals still comprise only 1% of all board seats, lagging substantially behind their 18.5% share of the U.S. population. (See “Latinas are the Least Represented Group on U.S. Company Public Boards” on page 27). In addition, at the current rate of change, women will not hold 50% of corporate board seats for at least another eight years. (See “How Can Corporate America Advance Gender Parity” on page 13).

Furthermore, as the global pandemic enters its third year, women have disproportionately borne the brunt of its devastating professional impact. Minority women in particular are more likely to be in positions requiring in-person work (Gould and Shierholz 2020). Many were laid off as the pandemic intensified while women of all ethnicities voluntarily dropped out of the labor force (Heggeness 2020) to care for children or ill, disabled, or elderly family members.

In fact, according to an analysis by the National Women’s Law Center (NWLC) of the latest U.S. Bureau of Labor Statistics report, as of January 2022, women have collectively lost more than 1.8 million jobs since February 2020. This figure does not include women who left the labor force entirely and are no longer looking for work. Had those individuals been included, about 5% of all women, 7.3% of Black women and 5.4% of Hispanic women would be considered unemployed, according to the NWLC report.

For those women who remain in the workforce, the burnout gender gap has more than doubled since 2019. According to a December 2021 Gallup Poll, women are more likely than men to feel burned out at work, 34% vs. 26%, with women in non-leadership positions especially affected. The mass exodus of women from the workforce combined with increasingly weary ranks of rising women leaders suggests organizations may have a smaller pool from which to choose qualified board candidates in the future, potentially slowing or reversing the positive advances toward gender parity observed in recent years.

However, a recent look at board parity by WBC indicates companies may already be widening their nets. As of February 2022, 114 women (31.1%) were appointed to public company boards, with58% of those women being appointed to a board for the first time.

The march towards parity—achieving board composition of more than 50% women—continues.

In fact, the following 10 companies have already exceeded parity, and half are led by women CEOs and Board Chairs: