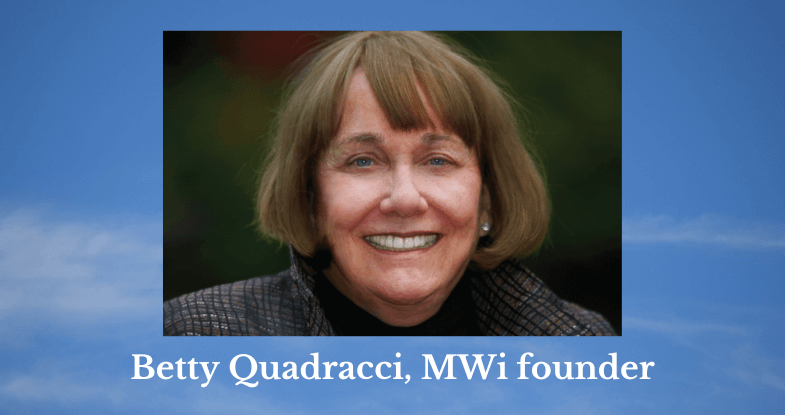 The organization celebrates 20 years since its founding.

In 2002, a group of Milwaukee women leaders, led by Betty, gathered to discuss a Milwaukee Magazine article entitled “Women & Power, The 10 Most Influential Women in the City.” The discussion focused on promoting research, educating community leaders on the value of diversity in corporate governance and management and eliminating barriers to the full inclusion of women in leadership positions.

Out of this discussion came the genesis for MWi, which started as a loosely structured organization two decades ago without formal governance that was adept at fundraising to support its research. It published its first annual research report in 2004. Milwaukee Women inc (the “inc” in the organization’s name stands for inclusive) was incorporated and granted 501(c)(3) status in 2010.

“I was right there with Betty at the beginning,” said Sharon Canter, a community leader, former business executive and MWi chairwoman emeritus. “It was really her encouragement and drive that brought us together to say we really need to have something that is going to impact the business community and create an understanding of the importance of diverse boards.”

Betty, who along with her husband, Harry, co-founded Quad, which began as a printing company and grew to a multibillion-dollar global organization, pondered the article in her own magazine that focused on the dearth of female executives at companies in Southeastern Wisconsin.

“With very few exceptions, Milwaukee’s corporate world was a white man’s world,” Canter said. “This issue became particularly close to Betty’s heart. The article showed that change had to be made. Betty had the power and influence to help facilitate those changes. She was willing to pick up the phone and call the bank presidents and the heads of law firms and major companies in Wisconsin and they would take her calls. She began to help build awareness around this issue and really mentored many of us. She called it ‘bias for change,’ meaning that no matter what limitations were out there, we weren’t going to let that affect our efforts.”

Each year, MWi compiles a report that measures gender diversity in director and executive roles at the 50 largest public companies with headquarters in Wisconsin.

Other key findings from the 2022 MWi Research Report include:

“MWi has come a long way since the late Betty Quadracci and other forward-thinking executive women recognized the need for an organization dedicated to changing the face and quality of leadership in the Wisconsin business community,” said Kim Stoll, MWi board chairwoman and vice president of sales and marketing for Badger Meter Inc. “We have made progress in furthering our mission to place more women and underrepresented minorities on boards, but there is still work to be done.”

As part of its ongoing efforts, MWi recently launched a free public database that features more than 70 board-ready women in Southeastern Wisconsin to help companies more easily identify and find ideal candidates for their boards.

“Research has shown that gender diversity brings significant value to an organization through thought and experience,” Stoll said. “That has been demonstrated through study after study. Companies want better results, and it happens when you have a diverse board.”

The work of MWi continues to foster diversity in corporate governance, she added.

“The business community knows, understands, values and believes in the results,” Stoll said. “What we’ve uncovered in various meetings with CEOs and governance chairs is that it comes down to creating awareness of how to go about finding that talent. It is out there. It’s no longer an excuse to say the people aren’t out there.”

Betty would find a level of satisfaction with MWi’s progress to this point, Canter said.

“I think she would be pleased, especially since the most recent goal we set we exceeded several years early,” she said. “But knowing Betty, she would not sit back on her laurels or let us do that. She’d say that we’d have to keep driving this forward.”

Racial diversity on boards will become more of a focus for the organization, Canter added.

“Although racial diversity was an issue right from the start for us, as we move forward, we are going to see more and more effort put into that arena because the numbers that our research shows, in terms of diversity as it relates to race, are really not good at all,” she said.

A sold-out celebration of Milwaukee Women inc.’s milestone anniversary of working for inclusive corporate leadership was held on Tuesday at the Pfister Hotel. Presented by Froedtert Health, the event will reflect on MWi’s two decades of progress and set the stage for the organization to continue its work in the future. Companies will be recognized for their commitment to gender diversity on boards as part of the event.

Nationally known executive Toni Townes-Whitley will deliver the keynote address. Townes-Whitley is the former president of U.S. Regulated Industries for Microsoft Corp. She serves as an independent director on the Nasdaq board and is a board trustee of United Way Worldwide,

Townes-Whitley will discuss Nasdaq’s trailblazing action to diversify boards by requiring disclosures related to the objective of having at least two diverse directors beginning in 2023. She will also discuss strategies for equity and inclusion for public and private companies.

In recognition of its unprecedented action to advance board diversity, the Nasdaq board will be presented with MWi’s inaugural Trailblazer Award. MWi created the award to “recognize a powerful voice fostering change on corporate boards and setting a vision of what modern governance should be.”

MWi will also be honoring Betty’s legacy at the event.

“Long before diversity became top of mind for business leaders and society, Betty was at the forefront of a group of women executives who recognized the value that experiences and background as it relates to gender can bring,” Stoll said. “Twenty years later, we’ve made progress and there’s progress yet to be made. The business community is working toward closing the gap as it pertains to gender, and we want to continue to help with that.”